Hi there,
My name is Neil Burnett. I’m 60 years old and have never raced in a car before.

After watching my friend race last year in the Drayton Manor Metro Cup, I thought about racing myself.

And here I am writing a blog about how, as an older, non-racing guy, can end up on the track, racing with the Drayton team in 2020.

It all started when I saw that a racer, Jon Moore, had his car up for sale. I talked it over with Tim Shooter, another racer and a good friend. He was honest and truthful about what to expect and explained that if I bought the car, the initial set up would not be cheap.

Tim pointed out there would be various things I would need to do in order to be able to race on the tracks in 2020.

1. Ards test and medical
2. Track Day test to hopefully get my licence.
3. Purchase Metro K series 1.4 GTI
4. Get car to race regulation specifications.
5. Join Drayton Manor Park MG Metro club for the year.
6. Join the MG race series.
7. Get some on-track experience in the car.
8. Get all the race clothing to FIA specification and in date.
9. Set tyres to race specifications.
10. March 2020 -Silverstone Race Day.

These are the basics you have to have to race.
I will take pictures and write up notes every time I go through each stage to prepare myself for getting onto the track for the first time as a novice racer.

After going to the final round of the race year at Snetterton, I had saved enough money to buy the car and arranged to pick it up on 19th October 2019.

This was an exciting day. Tim Shooter took me to pick the car up.

I needed a trailer to transport the car to the races which I bought from another race member Phil Goodwin. We picked this up on the way, then went to get the car! 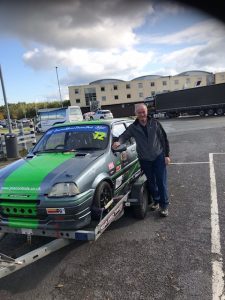 We stopped on the way home for a well deserved coffee & lunch break, then later arrived home and  unloaded the car and put it in the garage . 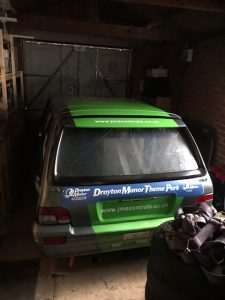 On my first track day, the nerves set in! Sunday 1st December at Cadwell Park…booked! with Javlin Trackdays.

Now reality was looming! I’d never driven the car and never been on the track in a race car, only bike track days .

6.30am 1st December – a very frosty car to un-sheet and take to Cadwell Park, taking it easy! On the way it rained! This was going to be interesting!! 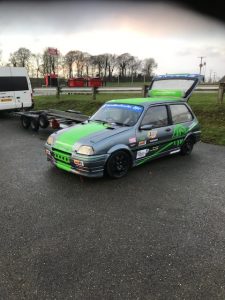 Arrived at Cadwell…ice on the ground, I could hardly stand up!

Tim arrived for the day to advise and help me out, what a great guy, his advice was brilliant.

10am slight delay after they had to remove some ice from the track.

Then comes the call…’all drivers to sighting lap!’

Belts on, helmet on, windows steaming and press the start button! Fired up and ready to go.
On track, running water and ice, take your time Neil or you won’t have a car to race!

I’ve not driven a race car before but I know it’s slippery. I’ve also not driven in the dry so have no idea how things should feel.

It felt great though and I started to get a feel of how the car performed In terrible conditions.
As the day went on, the running water stopped and it dried a little but still slippery everywhere !

I was pleased with the day, loaded up and left unscathed, apart from a failing alternator, my first fix item.

Got home safely, car in garage, thinking of ordering parts. To get out on the track next time, I have been advised by all the experienced drivers that ‘bum in seat time’ is the best way to learn.

It felt good so here’s to a dry run in Feb 2020.
I will blog as I progress on to getting my licence.
Thanks to all the race members for their advice and help to getting and taking the car on
the track for my very first time EVER !